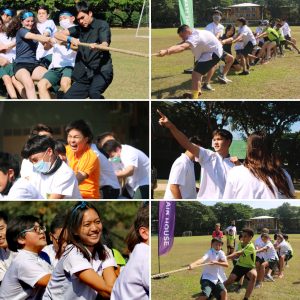 It was a fantastic effort from all and it was great to see the houses supporting each other during these competitions. Next up is the Staff Interhouse Tug-of-War on Monday!

Special thanks to Lee Stevens for refereeing both events, and to all the House captains for pulling together the teams!

We need your help. We are looking to take as much single use plastics as possible out of circulation as […]

Join Traidhos for a 24 Hour Camp

Have you missed time outside recently? Join the 24 hour camp after school Tuesday 15 Feb until the afternoon of […]

A message from the Counsellors

Dear families,  as we are in uncertain times both with regards to the air quality and concerns around the COVID-19 […]

Our Middle and Senior School students have nominated and elected new House Captains for the 2019-20 academic year. The House […]