A once in a lifetime occasion…a day to remember. September 19th 2022 Commemoration Ceremony: Queen Elizabeth ll

As people around the world paused to reflect and honour the life and work of Queen Elizabeth ll, the pomp and pageantry as seen in central London to mark this historic occasion was of such a grand scale that it is unlikely an event of this size and stature will ever be seen again in our lifetimes.

In these moments, the world comes together as one; one world, one nation, recognizing that we can all learn how to be a better version of ourselves every day that we live following in the footsteps of Queen Elizabeth ll.

Many thousands lined the streets of London and millions around the world watched on mobile phones, TV screens at home or in large open outdoor spaces with LED screens relaying every step of the Queen’s last journey to her place of rest.

In this rich tapestry, with London being the centre piece, there were many countries around the world who would similarly share their own moment of reflection and celebration. Here in Chiang Mai, it was a great honour for Prem students to be involved in a Ceremony of Commemoration. Instrumentalists and singers from Prem led the musical tributes in-between evocative readings and reflections read by ambassadors and consuls. The Royal Thai Army also wished to pay their respects and provided a guard of honour for the occasion and a 21-gun salute which followed the heartfelt singing of ‘God Save the King’.

As the night skies over Chiang Mai glistened with the last remains of the setting sun, in the warm glow of a life uplifted – Queen Elizabeth ll, our offerings were a little part of the bigger tapestry of commemoration that was so poignantly woven together with that of other parts of the tapestry around the world. In so doing, we can truly say that in this moment, the world was as one, sharing one vision and one heart. 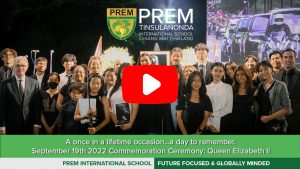 “May flights of angels sing thee to thy rest”

The Prem Academy of Music opens its doors again…

Never B Flat, Never B Sharp, Just B Natural!

As Director of Music, I am happy to report that individual music lessons are now in full swing. It has […]